Narrative Poetry - This genre must tell a story. A narrative poem will always feature some sort of plot, although it may not be very complex. Normally there will be at least one central character and often the poem will be written from this protagonist's point-of-view. It is always important to recognize that the narrator and the poet are two different individuals. A first-person piece doesn't mean that the "I" refers to the author.

Because I also write prose fiction and plays, I find that creating characters is both entertaining and useful; often this is the easiest way to communicate my own ideas. These people speak for me to an extent, even though they are not "me" as a person. I like putting myself into another's skin and determining how he or she will think and act. Perhaps it's a Pygmalion complex, and the poem itself becomes my Galatea.

You'll note that these two poems are both written in iambic pentameter. There are variations, however, since the poems are narrative rather than lyric, and musicality of the language is secondary to the story being told. The first is done in rhyming couplets; the second has an alternating rhyme scheme (ABCB). I found it a challenge to keep both rhyme and meter unobtrusive but I'm hopeful that it worked.

If anyone has a comment about whatever you find here on my site, please don't hesitate to let me know! You can post on my message forum or use my email address given below. As a writer, my greatest joy is hearing from the people who take time to read what I'm doing. Thank you all!

Tannis - one of my friends

A Word to My Readers

I've been unemployed, and I've been employed  ... employed is better! But in these days of dot.com disasters, middle-management downsizing, Enron exposees and other workforce horrors, far too many talented people are out there pounding the pavement while time passes and their abilities go to waste. 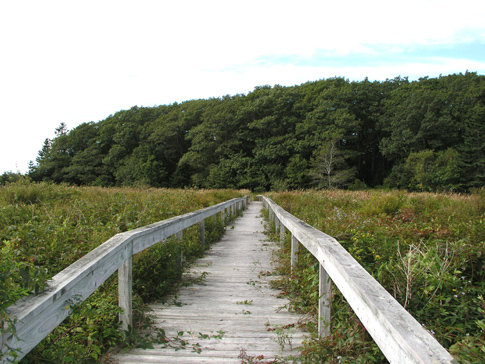 "I took the road less travelled-by, / and that has made all the difference." - Robert Frost

Instead of my briefcase, gold-stamped and proud,
I bear a canvas bag. Caught in this crowd,
I freeze inside, trapped without home or hope,
my spirit outlined by my shoulders’ slope.
Behind, old office building stands as stark,
uncompromising concrete, casting dark
shadow across my back, doors closed and barred
against employees shunned for working hard.

‘Downsizing’ - euphemism for being fired -
cast me onto this sidewalk, thin and tired,
shuffling in shoes worn into shapelessness,
dead cellphone in my pocket, now useless.
If I don’t eat today, I’ll be all right;
I had a dumpster sandwich late last night
and stayed quite warm down in the subway well.
Funny, how cold it gets up here in Hell.

Passersby stare, then quickly look away,
calling us ‘welfare bums’, who don’t want pay
earned through honest effort. Instead, they guess,
government handouts feed our laziness.
My wife is gone; my son’s with her, of course.
I think she’s in . Our divorce
must be almost final. No Fixed Address
means I can’t get updates on its progress.

We move ahead slowly. Beating fingers
against my sides brings warmth, but pain lingers.
Frostbite’s no stranger. I ignore these chills,
and cope because I can’t pay doctor bills.
‘You’re next, buddy’ somebody calls. I smile,
flashing my only asset. All the while
remembering framed parchment, packed away.
Nobody here can use an MBA.

First interview today:  I stand,  humble
before a chipped desk. My words halt, stumble,
catch in my dry throat. ‘You?! A stevedore?’
he laughs. I sigh. I’ve been through this before,
so leave my place to younger, stronger men
whose bodies won’t betray them. Once again
checking Want Ads, slowly, with dejection,
I drag myself to my next rejection.

Sunlight intensifies; my faint breath steams
against a backdrop of forgotten dreams.
Arching across the skyline, a bright span
attracts my feet. Newborn and hopeless plan
impels me up onto steel skeleton,
framing the river. Five hundred feet down,
chill, murky swirl invites me with its call.
Praying to no one,
I step off and fall. 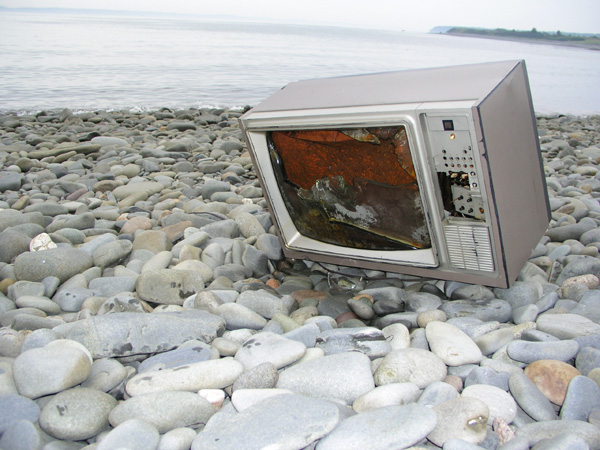 An abandoned television sits forlornly on the Belliveau's Cove shoreline.

Across fridge carcasses, strewn plastic-white,
stoves without doors, battered freezers upturned,
we hardly notice sleek rats scurrying,
lost in the haze of tires being burned.
A crumpled couch ejects coils of innards,
rusted with rainfall, curling boldly up
to penetrate unwary rears. Large crates
lean on its arms, bear broken bowls, a cup
of moldy coffee, pock-marked corn ears, bread
like styrofoam, the remnants of my meal.
The sunset turns a smoggy cloud to red,
and glares from office windows, as unreal
as raw skin peeled like scalp from someone’s head.

Here in the Maze, glass houses can’t throw stones.
Dark catacombs of buildings’ shells unwind
to shelter us from elements. Our homes
shift with the seasons, so this sofa’s mine
until October when the frost attacks
and withered grasses singe next to a pit
where city workers pile the leaves, or stacks
of pricey trash [we steal our share of it].
Beneath those dwarf trees at the river’s edge,
we tend three battered gravestones, names erased
by moss and gulls. Beside them, a rock ledge
exposes earth’s old bones, graffiti-faced,
while papers clot, pronged on a scraggly hedge.

See that small sandspit? Last month, washed ashore
we spotted someone’s body, dragged it here,
then noticed he was breathing. And, what’s more,
he’d broken his right arm. You know, it’s queer:
he looks like any shelter refugee;
but wears a ruby ring with college crest,
and doesn’t take a drink, not even free.
We offered him some whiskey but he just
smiled sadly, shook his head. We let him be.

He’s sitting on a slab of old cement,
a sling around his neck; he’s watching me
as if he wants to talk. I think he meant
to drown himself and failed. You’d never see
a swimmer here, by plan or accident.

This winter’s gone down hard. Today’s been fair,
so we’ve crawled out of all our crumbling rocks
like turtles into sunshine. Our friend, there,
is living in a basement near the docks
that used to be so busy. Two decades
have grown them up with grass, unvisited
by barges passing close. Memory fades
of days when this was a shipyard, instead
of jumbled piles of walls and foundations,
a home for dispossessed and underfed
stray cats, lost dogs, two new generations
of street kids, would-be suicides, wounded
but not destroyed by fate’s depredations.

He lights one match, watches it flare and die,
alone, so all alone; his hollow face
echoes his heart, empty as April sky.
I grab some rolls and jam, head for his space,
hold out my offering and smile. He sighs,
accepts and eats. He’s gained a bit of weight
since Jojo hauled him here but still, those eyes
carry their own burden. I hesitate.
‘How’s the arm, Bud? You think it’s gonna heal?’
He studies me and coughs. It’s been eight weeks
of silence. Something’s shattering. I feel
the air between us move and hope he speaks,
if only to share some of his ordeal.

He shrugs and looks away. ‘Two months ago,
I had no job, no luck, no food, no bed,
nothing I could call mine. Nothing. And so,
I jumped off Gateway Bridge --  better off dead
than living, was my thought -- but, as you see,
that wasn’t what the Powers must have planned,
caring about a derelict like me,
guiding me in the current to that sand.'

He stops. I nod. He sighs, begins to shake
with retching sobs from somewhere way down deep,
and hugs me quick, one-handed. I just take
a breath, hold tight, step back and watch him weep
He straightens, wipes his cheek and sets his chin,
accepts a stolen beer, slips out a grin,
then sips and starts to lay his ghosts to sleep.

In shadows I lift

face to sky so God will help

I shed and shiver. Soul-seeds