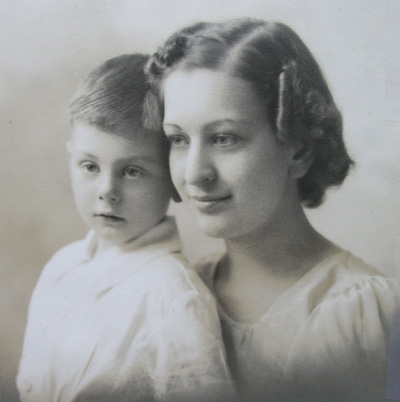 Helen Ruth (Young Bardell) Levy and son, Douglas Bardell. "Dougie" was born in 1930 and died from spinal meningitis at age four. He and my mother are buried together with Arthur and Ella in Willowbank Cemetery, Wolfville.

Some photos will be duplicates of those here, but others will be new and I update often. 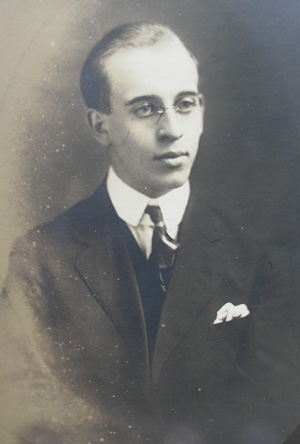 Cecil Young, who later owned The Palms (now Joe's Emporium); he and his family lived upstairs. I remember him well, as a stocky, bald man with a rather abrupt sense of humour and a flair for the best banana splits in town. Cecil and his wife, Marge, were fixtures in the 1950s and 60s when I was growing up. 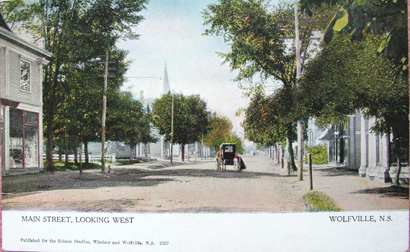 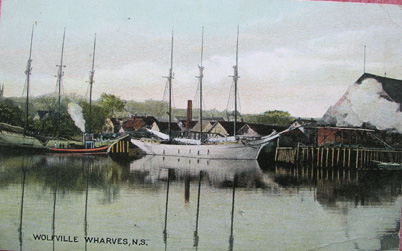 Enjoy these photos taken from the past of my hometown and family. Perhaps you'll recognize individuals or find familiar names here. I plan to keep adding to the collection as time permits. - Brenda 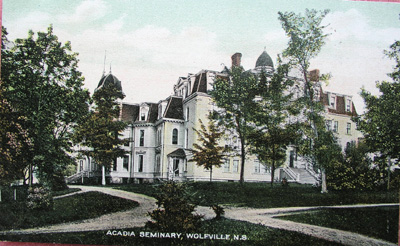 Acadia Seminary, circa 1908 (please see my postcard pages from this era) 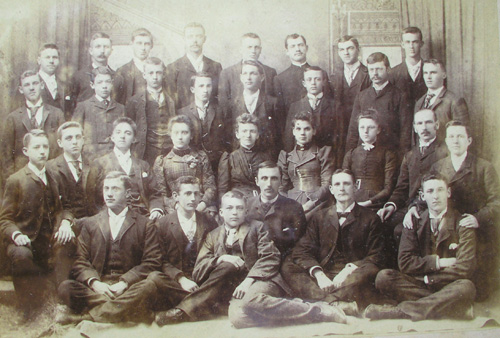 Class of 1896, Acadia University - second woman from right, second row, is Ella Wallace Young, my grandmother. The other women include Minnie Brown Cutten, Minnie Meagher and probably Mary Smith (Ella's cousin). Please let me know if you can identify others in this photo. It hung on my mother's wall for many years. 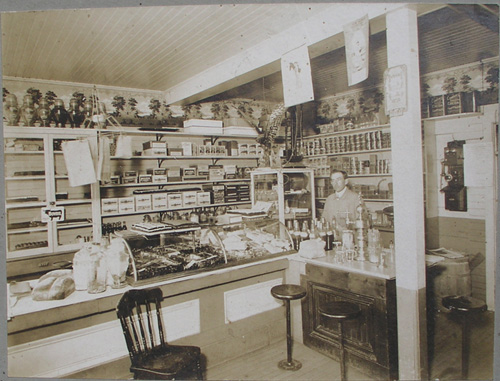 Interior of Arthur Young's Restaurant in Wolfville - corner of Elm Avenue. This is now The Coffee Merchant. My family owned the building through two generations and I grew up in the upstairs apartment (which is now a delightful pub - my grandmother, a staunch Temperance lady, would have been horrified!). My grandffather, Arthur, was renowned for his apple pies. Another relative, Cecil Young, operated The Palms restaurant, also a student hangout at the other end of Main Street. 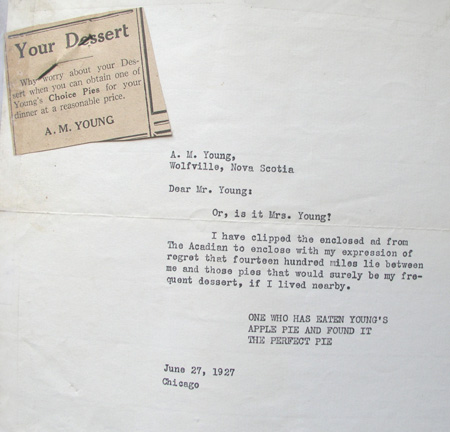 A complimentary letter from one of Arthur Young's customers dated at Chicago in 1927! The Acadian was the Wolfville newspaper for decades, until absorbed eventually by The Advertiser out of nearby Kentville. 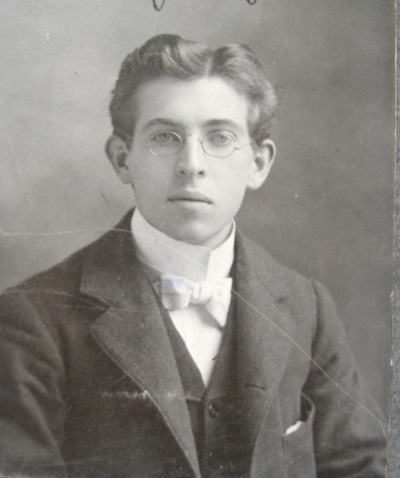 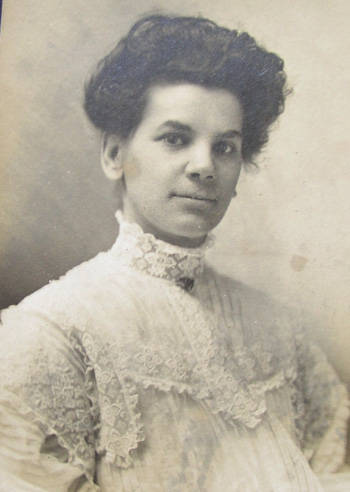 Ella May (Wallace) Young - his wife and helpmeet 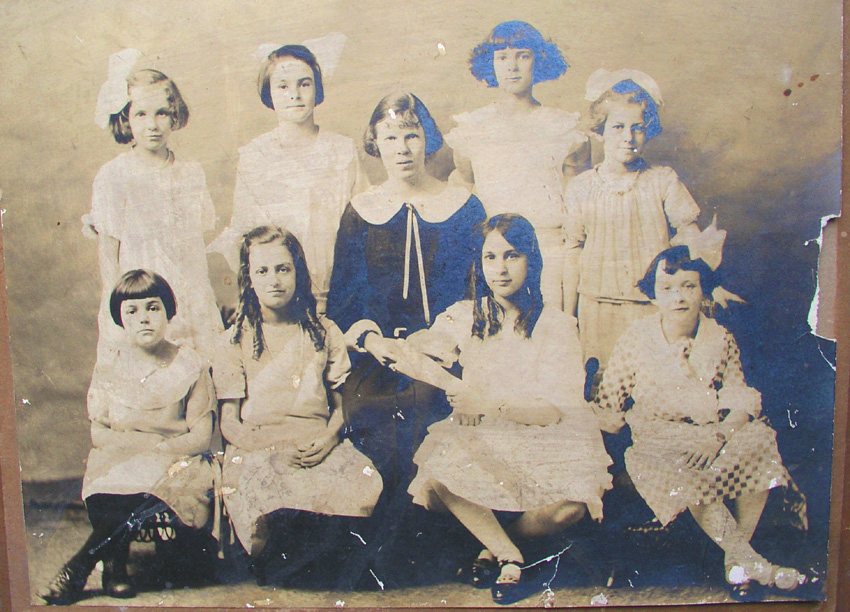 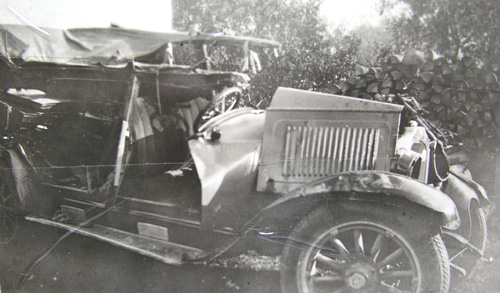 This is a "one-lung long distance" Ford. It was the second car in Nova Scotia, purchased by Arthur Young around 1908.  It had all of seven horsepower, and caused quite a stir in town. In its later years it fell into great disrepair while it was stored in a garage on Front Street. 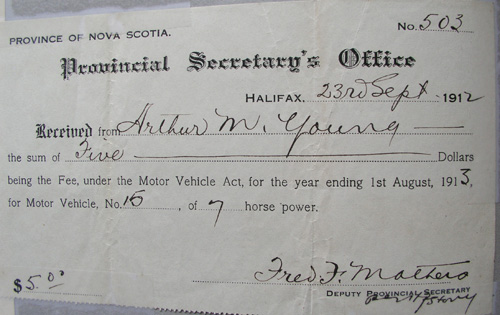 Registration (1912) for the old Ford. It was so simple in those days! 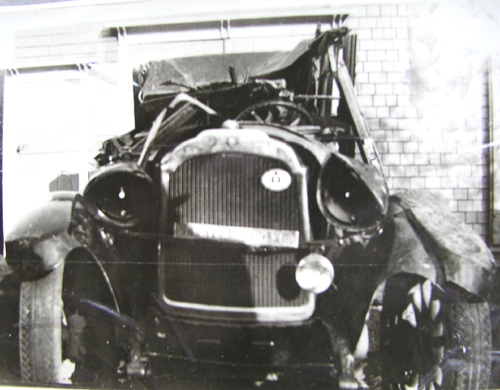 Luckily, even derelict antique cars have guardian angels and this one came in the form of a gentleman from New Brunswick. I believe his name was Mr. Black and he bought the car from my parents sometime in the 1970s. As can be seen from the photo below, he restored it beautifully. If anyone knows its whereabouts today, I would love to hear from you. 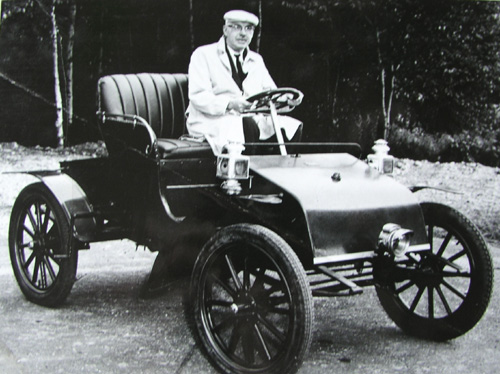